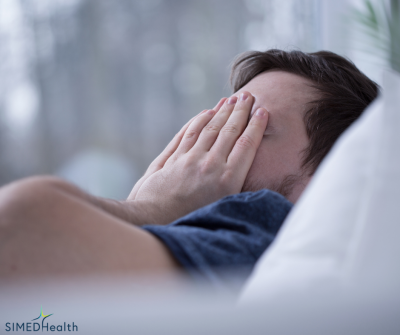 According to the American Academy of Sleep Medicine, 26% of adults between the ages of 30 and 70 have sleep apnea. We talked to SIMEDHealth Neurologist and Sleep Physician Anthony Ackerman, MD, about sleep apnea and what is involved in diagnosing someone.

1. We hear the term "sleep apnea" a lot, but what exactly is sleep apnea?

Dr. Ackerman responded, "Sleep apnea is a sleep breathing disorder. There are three different types. The first and most common is Obstructive Sleep Apnea. In this type, the airway is blocked or partially blocked by the relaxed tongue and soft tissues of the pharynx. The obstruction commonly results in snoring or causing the person to wake up gasping or choking during sleep. The next type is Central Sleep Apnea which occurs when there is temporary slowing or stopping of the brain's breathing drive. Central Sleep Apnea is seen in neurologic brain disorders and is no associated with snoring. There's also something called Complex Sleep Apnea which is a combination of both Central and Obstructive Sleep Apnea. All of these types can lead to decreased oxygen delivered to the heart and brain, which cause disruptions of sleep from arousals or micro-arousals, of which the person may or may not be aware. They prevent the brain from going into the deeper, more restorative stages of sleep, such as REM (Rapid Eye Movement Sleep) and Delta sleep. It is during these deeper, restorative sleep in which the brain removes plaques and tangles debris in the brain associated with Alzheimer's type dementia."

2. What symptoms does someone suffering from sleep apnea experience?

"The person can have snoring, wake up gasping or choking, long pauses with little or no air moving during sleep," Dr. Ackerman explained. "There can be frequent nighttime arousals, and trips to the bathroom to urinate occur more often. They wake up unrefreshed and often with a dry mouth and/or morning headaches. They can have daytime sleepiness, increased irritability, and worse control of their chronic health conditions such as diabetes, congestive heart disease, heart arrhythmias, and pain syndromes. It also commonly indirectly disrupts the bed partner's sleep due to loud snoring and frequent moving around in the bed."

3. What causes or contributes to the occurrence of sleep apnea?

"The most common cause is being overweight, although being is not a requirement. Physical conditions associated with sleep apnea include having a narrow airway, a large tongue, uvula, or tonsils, having a large neck, taking certain drugs or medications such as alcohol or opiates. Neurologic diseases such as neuromuscular or motor neuron disease have a high risk, including ALS or Lou Gehrig's disease. And also, the aging process can contribute to the risk for sleep apnea", according to Dr. Ackerman.

4. What are the steps to determine if someone has sleep apnea?

Dr. Ackerman advises, "You'll want to discuss your sleep concerns with your Primary Care Physician and request a referral or call the SIMEDHealth Sleep Center directly to schedule an appointment for an evaluation. During the initial sleep clinic office visit, you'll relay your sleep symptoms and concerns to your doctor, who may end up ordering a sleep study. The study would consist of an in-lab overnight study or possibly a home study. If you're diagnosed with sleep apnea, you would likely be started on something called positive airway pressure or PAP therapy. It consists of a mask that fits under or over the nose or even over the nose and mouth. It delivers a mild air pressure that maintains the open airway. You will then follow up with the Sleep Center clinic approximately one month later to discuss your response to the therapy and address any developed issues. For some, it can take a little while to sleep undisturbed by PAP therapy. If needed, mask and PAP desensitization can be arranged through the Sleep Center. The desensitization is quite successful with many patients."