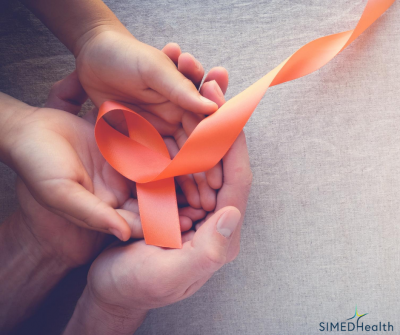 According to the National Multiple Sclerosis Society, nearly 1 million people are living with MS in the United States. Back in March for Multiple Sclerosis Awareness Month, we talked to SIMEDHealth Neurologist, Justin Yancey, MD and he answered some of our questions about MS. MS Awareness Month aims to bring attention to MS research and bring awareness for people living with the condition.

1. What is multiple sclerosis (MS)?

Dr. Yancey says, “It is a neurological disease where the immune system attacks the protective coating around nerves in the brain, spinal cord, and optic nerves. This causes communication problems between the brain and the rest of the body. When these nerve coatings get damaged, the messages dictated by the central nervous system are altered or stopped entirely.”

2. What are its symptoms?

3. Can you explain what relapsing-remitting MS is? Is this something all people with MS have?

“Relapsing-remitting MS is characterized by clearly defined MS attacks (also known as relapses) with full or incomplete recovery (also known as remissions). There is generally minimal progression in symptoms during the periods between relapses. Symptoms during attacks usually peak in days to weeks and are followed by a remission period. Relapsing-remitting is the most common form of MS and accounts for about 80-90% of cases at the onset.” says Dr. Yancey. Most people with Relapsing-Remitting MS are diagnosed in their early 20’s and 30’s.

“The exact cause of MS is unknown,” says Dr. Yancey. “The most widely accepted theory is that MS begins as an inflammatory, autoimmune disorder where the body’s immune system attacks the nerve’s coating.”

Dr. Yancey explains, “An acute MS attack is typically treated with steroids. Medications are also used to help prevent attacks. There are several different options, including injections, infusions, and oral medications. No cure is available for MS, but these medications help reduce relapse rates and reduce disability progression.”

If you have questions about MS, click here to schedule an appointment with one of our qualified neurologists at SIMEDHealth.